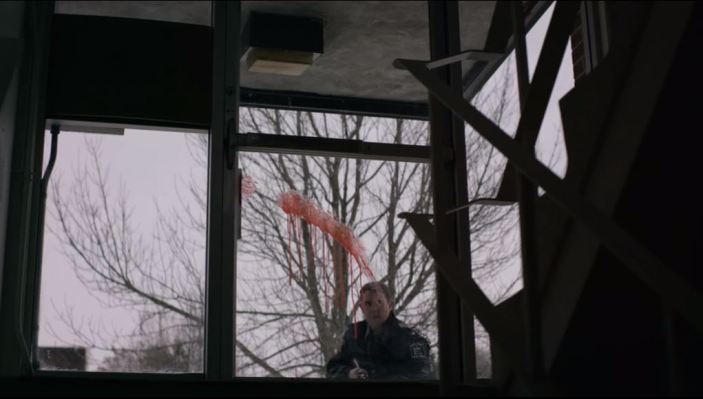 Boarding schools are ripe for demonic possession and dastardly plots in general, given the potent mix of hormones, schoolgirl-age jealousies and extreme isolation. ‘February’ takes that scenario one step further, as we follow young ‘Kat’ during a lonely winter break at ‘The Bramford School’. We also also follow the story of ‘Rose’, who’s hitchhiking through the snow with a kindly older couple. As Kat’s unease grows worse during the break, and Joan’s paranoia increases, it’s well worth holding on to learn how these stories converge and how it all links back to the sinister forces lurking in the chilly, semi-abandoned school.

Making a big positive out of its low key vibe, February (also known as The Blackcoat’s Daughter) steadfastly refuses to rush towards its most shocking moments, preferring instead to chill you with endless views of untouched white snow, then glorying in the pitch dark shadows within the frigid school’s buildings. With a muted, groaning soundtrack designed to stimulate unease (but, sorry guys, on the first watch it nearly sent me to sleep) calling this movie ‘bleak’ would be an understatement. It’s dark yet pale and it’s deeply unhappy, and that’s just the schoolgirls. It has surprisingly sympathetic adults too, who are simply unable to comprehend the true darkness at hand.

And oh boy, is there a lot of darkness, in the film and the plot. Expect no primary colours from this at all, just austere shades of bright white and municipal blues, though it has dodged the grimy greenish horror filter that a lot of genre films used to favour. It does make the inevitable splashes of scarlet blood pop from the screen, which works well, and hopefully you’re still watching by then.

So  even if I prefer little more warmth and glee in my horror movies, I really want to love this film more than I do, and there is plenty to appreciate. The ending’s gut punch resolution is definitely worth hanging on for, and requires some attention to the subtle clues and a spot of emotional empathy to really figure out – why the fuck did she even do that? Recommended, if you want a low key, creepy horror. In fact, February has kind of grown on me. So if you give it a try, just remember that it saves most of its boldest moves for last. Worth sticking with.

END_OF_DOCUMENT_TOKEN_TO_BE_REPLACED

Mothers and daughters can have fraught relationships, and Leah (Nicole Muñoz) and her mother (Laurie Holden) are no exception. Her father has recently passed away and neither of them are dealing with it healthily. Leah has started getting into the Occult, her bedroom is full of books and moody posters, and although it at first seems like a morbid teen rebellion – and quite understandable – after an epic fight with her mum, Leah angrily storms into the woods and starts slicing into her arm, trying to summon ‘Pyewacket’ to rid her of her mother. Bad move, Leah. At first nothing happens, but then odd occurrences start to mount up. Was her ritual successful, or has she really gone off the deep end?

Pyewacket (it’s fun to type!) fully gets that ‘nothing’ is usually scarier and wrings every bit of tension out of that. It’s closer to Paranormal Activity than the more overt Insidious, using shadow and suggestion to creep us out. The camera makes us very intimate with Leah too; we’re often pressed up uncomfortably near to her face, watching her reactions, the snap of her emotions, sucked right into her point of view. Leah seems to feel trapped in the repetitive routine of School, drinking with friends and moping at home, whilst being driven, sulking next to her mother. It’s clear that she’s still very much a child and her efforts to kick her way out of that role sends her down a darker and darker path.

I found Pyewacket fascinating and sad, and can highly recommend it for some deeply uneasy, mostly very subtle, horror. Like Hereditary on a sliver of the budget. Pyewacket requires applying a little empathy – but then most good horror, the kind that stays with you, does. If demons really exist, then please don’t mess with them. Their deals rarely turn out the way you hope. Just steal your mum’s credit card instead.

WARNING MASSIVE Spoilers in the section below that make more sense after you’ve watched it:

END_OF_DOCUMENT_TOKEN_TO_BE_REPLACED

The Eyeball Liked These