Two brothers living dead-end lives receive a video from a cult they used to belong to, and are persuaded to make a return visit. Only trouble is, they think it’s a death cult. Weirdly, when they finally arrive there, nobody seems to have aged or really changed at all. Is everyone living really well, are they all ghosts, or is something much weirder than your typical cult horror movie about to take place?

The Endless is a brilliant followup to Justin Benson and Aaron Moorhead’s strange and engaging 2012 Resolution (2012). It’s not necessary to have seen Resolution first, but there are several links to the earlier film nestled within Endless, tying up some loose ends, though it delights more in unravelling new threads. With a knack for spreading tiny details that add up to huge realisations, it deals with the infinite but keeps it all relatably at ground level. That’s about the best you can hope for in a film tying together Lovecraftian concepts of vast, unknowable monsters, warped space and time, and strange UFO cults and meth heads living out in the back end of nowhere. There’s an uneasy feeling about the land that the cult inhabits (but they’d prefer not to be called a cult, thank you). There’s practically no jump scares here though. The creepy aspect comes down to pure existential dread, as the truth of their situation is gradually revealed.

Justin and Aaron come face to face with the truth

The real horror hits the viewer alongside the two brothers as they come to understand the terrifying forces at work, but its the focus on this little group of people and their reactions to the insane situation that really make us care. And I cared a lot. The two brothers have a difficult relationship but clearly look out for each other, and this emotional connection, as they struggle to decide what they want out of life, is the crux of the story. If they do decide to leave, will the strange force at work even let them go?

While it’s not a typical horror, The Endless is every bit a Lovecraftian nightmare. There’s little gore either, but this film rewards a bit of patience, so if you’re ready to question your sanity, and peek at the secrets behind an eternity of time and space, then I’d recommend you dive right in.

Big Spoilers (including some for Resolution)

END_OF_DOCUMENT_TOKEN_TO_BE_REPLACED

Some films are so bad they’re good (or good enough). This distinctly odd low-budget feature is one of those. Starring Izzy from Hollyoaks (Elise du Toit), the money-lending bad guy from Limitless (Andrew Howard) and the now very established Matt Berry, I’d been aware of this film for a long time and always intended to see it. Back in 2006, I’d been intrigued by the original trailer that promised a nightmare inducing monster and plenty of gore. Now that I’ve finally caught it for 99p, over ten years since its release, I’m caught between acknowledging it’s kind of awful, but impressed that it mostly delivered on what I was hoping for.

It centres around an unwise investigation into an insane asylum. A bunch of academics and a survivor investigate the ‘devil’s chair’ which apparently caused a big mess several years ago. The characters bicker constantly – it’s always a fine line between that attitude being fun, and making me hate the characters. In this case it leans towards the latter. Particularly annoying is Matt Berry’s ‘Brett’ character (named for Alien’s Brett perhaps) who takes ‘entitled rich arsehole’ to new levels. Maybe it’s more grating because I’ve seen him in other things, but in Devil’s Chair he tries for the funnybone, intentionally or not, and it’s quite jarring compared with the rest of the cast’s efforts. His magnificent voice actually works against him in this case.

In contrast, Nick West’s constant narration about how much he hates the university schmucks drags the whole story down, bashing on and on with his repetitious contempt – we get it, you truly loathe the academics and think you’re better than anyone else there – but it does, at least, serve a purpose.

If you can get past the awkwardness of its presentation, there’s plenty here for gorehounds. Clocking in at 91 minutes, it doesn’t overstay its welcome, and gleefully straddles that awkward, camp-yet-nasty area that the Human Centipede movies squirm around in. Whilst its monster is pretty great, and the twist even greater, this is definitely not a GOOD flick. But if you can get past the smug-bastard voiceover – which does ultimately serve a purpose – then it’s a bloody good ride into low-budget madness.

The devil advances. Might be best to watch in a darkish room. Light is the enemy of horror film watching!

Review with SPOILERS below – going to go into detail here about events in the film, decisions of characters. Do not proceed further unless you really want to know what happens. Also don’t read its wikipedia entry, which summarises the entirety of the plot for some reason.

END_OF_DOCUMENT_TOKEN_TO_BE_REPLACED 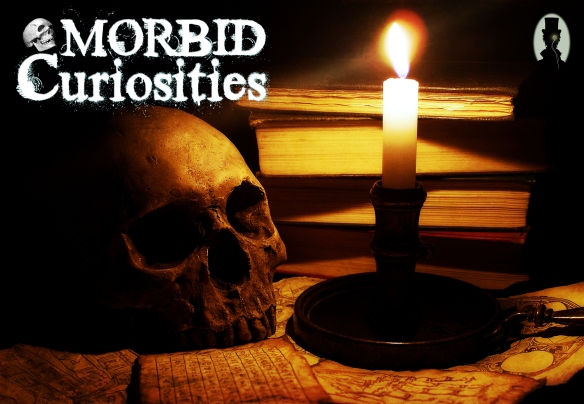 Don’t go into the Cellar Presents…

A spooky evening was had by all as The Haunted Eyeball attended Morbid Curiosities, a production based around classic horror stories, adapted by Don’t Go Into the Cellar and performed at the Art House.

Jumping at the chance to enjoy a live performance of some of our favourite classic horror stories, the Haunted Eyeball raced to see Morbid Curiosities on, the appropriate evening of Friday 13th March 2015. Climbing up to the cramped, yet cosy, upstairs rooms of the Southampton Art House, we hungrily devoured four tales of ghoulish terror, originally authored by Victorian crime writing gentleman Sir Arthur Conan Doyle, and the 20th Century’s finest weird fiction writer, H P Lovecraft. The atmosphere was built by the obligatory spooky skull and strange, horned creatures perched on an intimately sized stage. We couldn’t wait to find out what stories would unfold and who would present them to us? Would it be Lovecraft, of Sherlock Holmes, or…or…

In fact, Harry Houdini (Jonathan Goodwin ) was to be our narrator, and he presented the evening using a rather jarring inflection. He SPOKE like this, “Ladies AND GENTLEMEN!” which was in some ways far scarier than the first act. Indeed, the HORRORS that he proclaimed would FOLLOW made us ALL the JUMPIER because of his randomly loud VOICE.

OK, we are nitpicking about volume. In a larger room it would be fine, and the presenting style perfectly fit Houdini’s outlandish, earnest sense of showmanship. It drew us directly into a ghastly world of horror and mystery.

After introducing himself, Houdini passed the first story to his associate, the genteel Mrs D’Odd (Amy Bullock). She described her rather tongue in cheek ghostly encounter, based on Selecting a Ghost by Sir Arthur Conan Doyle. Nailing the pomposity and the aspirations of a would-be aristocrat, this drew belly laughs and many eerie moments, all played out nicely with an excellent payoff.

With one ghostly tale laid to rest (or not), Houdini returned to ponder over a horned skull, and talk of false séances that enraged him. Although very well performed, Playing with Fire by Sir Arthur Conan Doyle was simply less impressive as a story – and this is a personal reaction. Basically, when you bring unicorns into it, it all veers away from the horror we’d turned up for, and for some reason it was a little harder to follow. Although performed with gusto by ‘Houdini’, we wanted some real, gut-wrenching horror, dammit, and were on tenterhooks for the eventual appearance of anything by H P Lovecraft. Given Houdini’s presence, we already had an inkling what of one of the stories would probably be, but were wondering what the other one might be from.

It turned out that both of the last two stories were by H P Lovecraft, and here the show fully hooked us again.  ‘Miss Rhodes’ (Amy Bullock) gleefully told the tale of The Hound, wherein a twisted couple, whose playful games with the dead would make Leatherface blush, get a nasty surprise when they grave rob an ancient amulet. Amy Bullock clearly took delight in the monstrous side of Miss Rhodes’ character. A truly great interpretation.

To our considerable delight, another Lovecraft gem followed. Of course, the presence of Harry Houdini meant we had immediately suspected that one particular story had to be told, and we were not disappointed. Under the Pyramids was bombastically presented, and vivid enough to smell the incense.

The stories of Conan Doyle and Lovecraft more than overcame the cramped conditions of the Art House top floor, and despite the presence of bright light, electronic speakers and drunken shouting from outside. The second half of the show was strongest, from a horror fan perspective – but when it got there it delivered pretty much what we were hoping for. Morbid Curiosities was an enormously fun event, and  we recommend for all UK-based Eyeballers to attend one of their shows as soon as possible. We can only hope that the shows get the creepy locations which they truly deserve, maybe somewhere like an old manor house or the Vaults of a long-disused port. The Haunted Eyeball sincerely hopes to see ‘Don’t go Into The Cellar’ and its other uncanny productions again. Nothing compared to hearing Lovecraft’s uncanny words spoken aloud with a group of people, and we had chills when the show rounded off with:

That is not dead which can eternal lie,

And with strange aeons even death may die..

There are plenty of reason to love Junji Ito’s work.

We’re about to cover just one of them, which should be more than enough for now…

Juni Ito’s manga is unfailingly horrific, disturbing and marvelous. If you love horror of any kind, we can’t recommend his back-catalogue highly enough. For the sake of this Monster Monday, however, we want to focus on his series GYO (The Death Stench Creeps)

and the disturbing, and mostly unexplained, phenomena that it tries to explain. Well, there is a rational explanation given. In the loosest possible sense of ‘rational’. Perhaps ‘plausible’ is the best description for what happens in this manga. It’s really dream logic, which makes it work, the sense of a nightmare you can’t quite climb away from and situation getting worse and worse.

is that sea life has started climbing out of the ocean on strange, organically manufactured but artificially installed little legs. The setup is pretty bloody weird already, but the horror doesn’t end there. The first appearence of a ‘fish with legs’ is almost funny. But it’s merely the warning shot of a much bigger disaster for humanity. Because these things are powered by the gassy stench of death itself, and the attacks from the ocean to the land are about to get much more deadly, and much larger, too.

Most notably, starting with this Gshunking monster:

END_OF_DOCUMENT_TOKEN_TO_BE_REPLACED

The striking cover for Dark Harvest, tales of Promethea, a brilliant example of word building and storytelling

END_OF_DOCUMENT_TOKEN_TO_BE_REPLACED

We’ve seen our fair share of zombie flicks here at the Eyeball. In fact, we were pretty sure no mere zombie could ever terrify us again.

Naughty Dog (creators of the Nathan Drake adventure games) have proved us wrong.

Half man, half homicidal mushroom

END_OF_DOCUMENT_TOKEN_TO_BE_REPLACED

The Eyeball Liked These